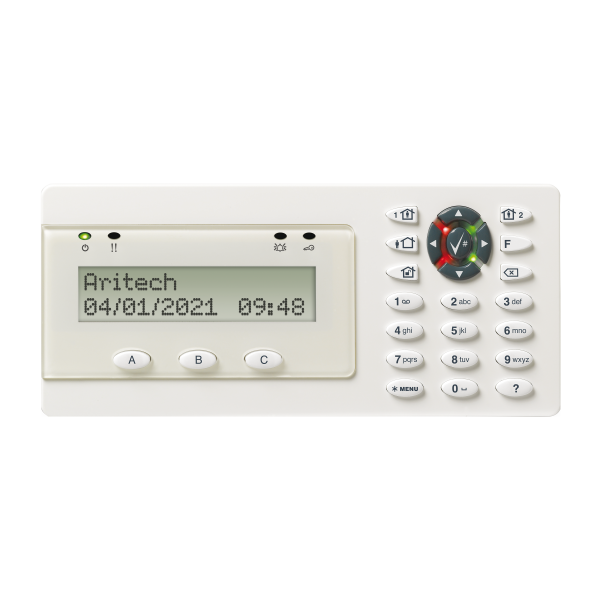 The ATS1135 is a new addition to the Advisor Advanced product family, having a simplified end user operation: quick arm functionality, 2 levels of partset, programmable function keys. The existing range of indoor/outdoor keypads and card readers can be used in different environments.

The ATS1135 has a modern stylish design and has a clearly readable text on a large 2 x 16 characters LCD for displaying system programming, alarm and access control functions. The contrast and intensity of the display is adjustable via the keypad as well as the volume level of the built-in buzzer. Four arrow keys will navigate the user easily through the programming and operational features and 4 additional fixed functions keys will complete this user-friendly interface next to the 3 programmable function keys A,B &C.

The ATS1135 has a built in smart card reader. The ATS1135 can be used for arming/disarming using either the PIN or the card or a combination of the two for higher security needs. It is suitable for using the multiple card badging techniques which are available for the Advisor Advanced product family. A user can set the system in the evenings by badging his card three times within 10 seconds interval. Another application could be for doors which can be programmed so that badging once unlocks the door to allow people in and out without card, and badging three times re-locks the door.

Four status LED’s will continuously update the user on mains condition, faults, access control and alarms.
Green – Power LED is on when the control panel is powered by the AC supply.
Yellow – Fault LED illuminates to indicate detection of a system fault.
Blue – Access LED flashes when access to an area assigned to the RAS is granted.
Red – Alarm LED illuminates when there is a system tamper or an area assigned to the RAS is in alarm state.
The Arming Station can display the status of an area or complete system via the status indication LED in between the navigation keys. When Green the area or system is disarmed, when Red the system is an armed or part armed state.

The ATS1135 can be mounted by using the mounting points in the backplate which also provides easy cable entry to connect the panel to the removable bus connector.
A backplate (ATS1135BPL) is available which can be used to cover the dimensions of a legacy keypad when updating an installation to the Advisor Advanced system.

We are a Systems Integrator providing design and build of Security, Safety and Communication Systems across different market sectors in East-Africa.